I've been promising another savoury dish for a while, and it's finally arrived.

Claire brought back a bag full of bramley apples from her dad's the other day, so I spent my Saturday trying to think of what to do with them. 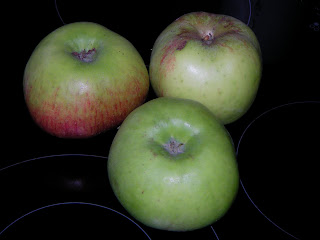 I settled for making a jar of apple sauce (pork chops later this week methinks), turkey mince and apple meatballs, and an apple crumble.

I made the apple sauce first.

Quick and easy, and much cheaper than buying a jar from the shop (and tastier for sure).

I used three of the apples for the jar - I think it's a 700g jar... hard to say now that the original label's gone though... The apples were all pretty massive, even by bramley apple standards, so you may want 4 sort of average sized ones.

Just peel and roughly dice the apples before throwing them into a pot with 50g caster sugar and 50g butter. 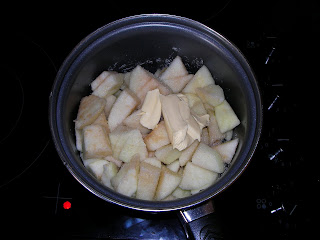 Then turn the heat all the way up and let them reduce down for ten minutes or so with the lid on.

You'll need to stir it through from time to time to stop it burning to the bottom of the pan, though a little caramelisation is good. After ten minutes give it a last stir, turning out any remaining lumps.

Let it stand for a few minutes and then jar it up! 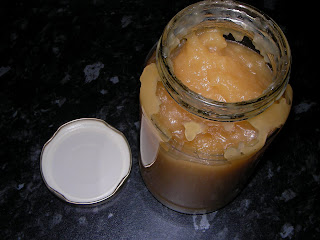 You will want to let it stand until completely cool before refridgerating. Once in the fridge, it'll last about a week - and it can be frozen too.

Then it was onto preparing dinner.

I suspect that pork mince or beef mince would have worked a little better with apple, but I only had turkey mince in the house. It turned out fine though.

For the meatballs you will need:

Very simple again - I always say that on this blog, but it usually always is easy to do. I'm going to have to try to find a really difficult recipe to make...

Simply though, take all of the above ingredients and mix them together in a big bowl. Lightly beat the egg before adding it in. Once they've had a good mix, season the lot well with salt and pepper. 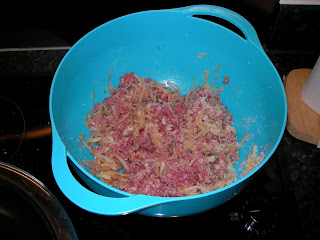 Now get it all to combine by mushing it all together by hand. Then start to form the meatballs - I managed to get 17 out of the mixture, but you could double that amount with more reasonable sized meatballs I should imagine. 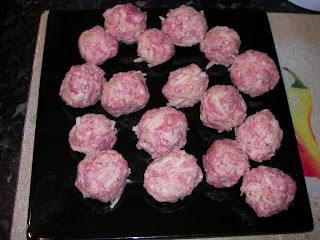 I finished the dish by shallow frying the meatballs, cooking up some fusilli pasta, and a simple tomato sauce.

You could put them in any normal meatball dish though - they're a little sweeter and a bit acidic, just a slightly different twist on what you might normally do.

Then it was the apple crumble to round off and use the last of the bramleys.

So simple yet again. Peel and dice the apples to roughly 1cm cubes.

Lay the apples in an oven proof dish and then cover in the cinammon and 100g of sugar. 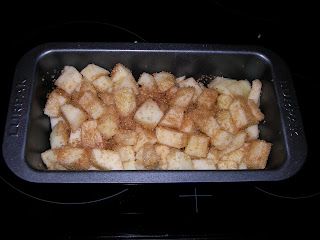 Mix the rest of the sugar with the flour in another bowl and then crumb this together with the butter to form the topping.

Once it resembles breadcrumbs, spread it evenly over the top of the apples. At this point you can also add some nuts into the topping for a crunchier finish and a little extra flavour. 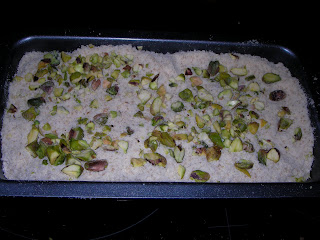 I added in some chopped pistachios that I had left over from the peach recipe. Almonds would also work well I think.

Then put the whole lot into an oven preheated to 180°C for about forty minutes, or until the topping has browned and the fruit is bubbling up the sides of the crumble.

Serve with lashings of cream... 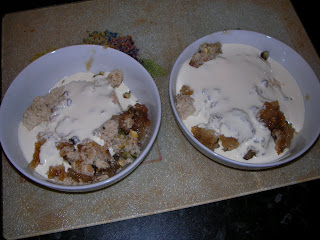 And that was that for the apples.

- Well, I have to use that apple sauce, but cooking pork chops hardly warrants a blog... So we'll see if anything else more interesting goes on in the coming week.
Posted by David at 10:50