Cake, Cake, And One More

I know I said that there was an imbalance of sweet to savoury in the blog recently, but having baked three cakes, I thought it was probably worth blogging about it.

I promise to put at least one savoury recipe up at the weekend. My brother might be coming over to stay and wants to put some practice in for a food course he's taking, so that'll be a decent excuse.

I had been fancying some yoghurt cake yesterday, and thought that I'd probably make one that evening after work and bring it in for the staff - it usually goes down well. Having some dietarily challenged folk in the office (coeliacs), I decided to also bake a gluten and dairy free cake for them too.

Starting with the glutenitis cake - a banana loaf - you will need (picture below is for all three cakes - don't worry!): 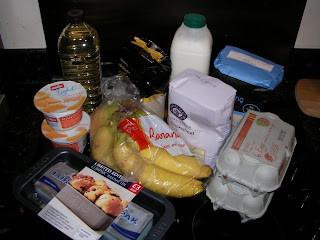 Buckwheat flour and rice flour are fairly readily available these days. If you can't find either in the shop though, fear not. The recipe can be made completely with rice flour - and you can make this at home too! Simply buy a bag of rice and grind it down very, very finely until you have rice flour. Simple as that. This is a cheaper way to buy rice flour, but obviously more time consuming and messy. 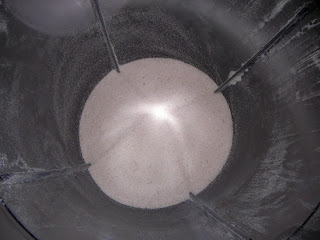 First mix together the two types of flour, the salt, and the baking powder in a large mixing bowl.

In a separate bowl, cream the sugar, butter and bananas together until smooth. At this point mix the two eggs in thoroughly.

Now combine the dry and wet mixtures well and pour the resulting batter into a loaf tin.

Whack the lot into an oven preheated to 180°C for about an hour. If the top of the cake starts to burn while baking, loosely but carefully cover with tinfoil. The cake will continue to bake, but will not burn at the surface. To check if the cake is baked all the way through, insert a skewer in the middle, and if it comes out clean then the cake is ready.

Remove from the oven and cool in the tin for about ten minutes before turning out.

Second up was the yoghurt cake. This cake works best when using citrus fruit yoghurts or toffee yoghurts. I would imagine vanilla would be okay, but the flavour from most other fruit yoghurts is not as good (though will still work fine).

Another loaf cake, this is again a simple and easy to bake cake. 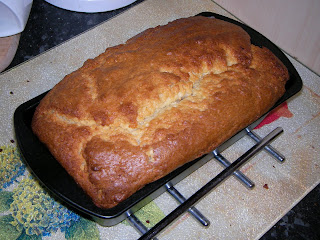 Once again, start by combining all the dry ingredients in a large mixing bowl.

Form a well in the dry mixture before pouring in the oil, eggs and yoghurt.

Combine the lot, and once again pour into a loaf tin to be baked in an oven at 180°C for about an hour before removing and cooling in the same manner as above.

As I was taking the cakes to work the next day, I left them to cool for a further half an hour before wrapping in tinfoil.

I then turned my attention to the five minute chocolate cake for Sammy.

This cake offends all my sensibilities as it is cooked in a microwave, but when thinking of a quick to make, one-person chocolate cake that Sammy could make at work, it really is the only one for the job.

I prepared the dry ingredients in advance to take to work for Sammy, and also brought a bottle of oil. We have milk at work, so I used what was in the kitchen. 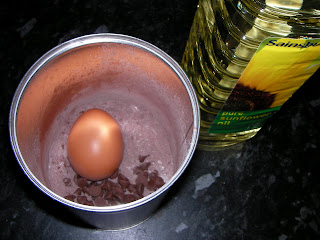 At lunch time we went to the kitchen to prepare this masterpiece of lightning speed cookery.

Taking a large mug, Sammy cracked the egg into it before pouring in the oil and milk.

Mixing all that together, the dry mixture was then poured into the mug and thoroughly mixed. You should end up with a syrupy, gooey looking batter. 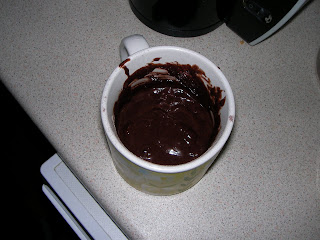 Make sure it's mixed thoroughly so that the chocolate chips are evenly distributed.

Once done, stick it in a high power microwave at nuclear settings for about three minutes. The cake will rise above the mug, but don't worry - it's part of the charm. 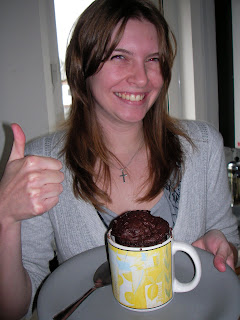 Cakes completed, they were presented to the office. I think they went down well... 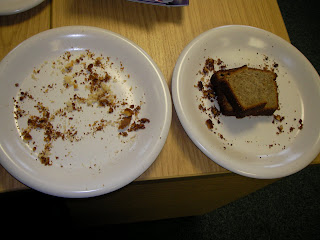 - Hopefully get that promised weekend meal up here. Not sure what it'll be yet
Posted by David at 10:40