So, Claire and I just celebrated our third anniversary. As a gift I offered to make a three course meal of Claire's choosing for us to enjoy.

Below is a blow by blow of how to go about putting this all together. I don't have many pictures due to trying to get it all ready, but I've put the few I do have in to give you an idea of what it should look like (roughly).

Seemingly illogically, I started by preparing the sweet potato bake, however it does take the longest of the two first courses to cook. The preparation is simple enough though.

For the sweet potato bake you will need:

This really is one of the simplest main courses I've ever put together, but it's really fantastic. Cube both potatoes (the baking potato cubes should be slightly smaller as they take longer to bake), slice the onion and peppers into small chunks, and lay all the vegetables into an ovenproof baking dish.

Grind plenty of pepper over the whole lot and toss it all in the dish with the oil until it is all covered. At this point I laid in the garlic so that I could remove it at the end before serving. 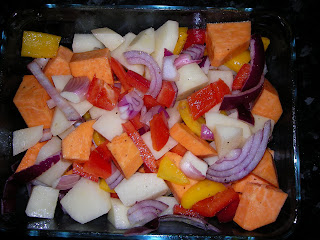 Once this is done, the whole lot needs to go into an oven preheated to 200°C for about 45 minutes. When it's ready the vegetables should all be nicely browned and caramelising.

While the bake was in the oven, I turned my attention to the chicken goujon salad. To my shame, I decided against making my own sweet chilli dressing due to having so much else to do for the courses. So for this recipe you will need:

Again, this is a really simple dish taking very little time to execute.

Firstly, prepare the chicken by cutting it into thin strips.

Then lay out three bowls, the first containing flour mixed with salt and pepper, the second containing the two eggs lightly beaten together, and finally the third containing the bread which should be crumbed in a blender.

Coat each piece of chicken first in the flour mixture, then the egg and finally making sure to cover the whole piece in plenty of breadcrumbs for a crunchy coating.

Once the strips are all well coated, place them into a hot frying pan and shallow fry for about 2-3 minutes on each side. The breadcrumbs should have browned nicely (my pan was a little too hot!). 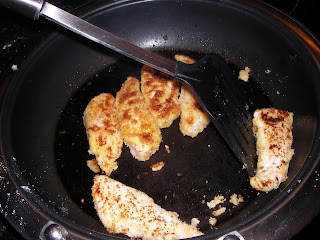 Once the chicken is done, take the pan off the heat and quickly arrange the salad leaves (we went for lettuce, though I'd have preferred rocket or something similar) on the plate. Place your goujons atop that and sprinkle liberally with the sweet chilli dressing and serve. 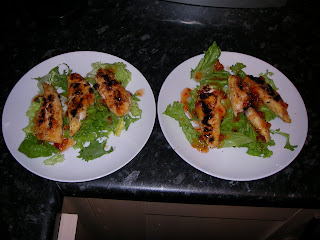 Timing wise, this should leave you about twenty minutes to eat the first course while the sweet potato bake is still in the oven.

To finish the main course then, take the dish from out of the oven once the forty five minutes is up and remove the cloves of garlic. Slice up the halloumi thinly and lay it across the top of the dish, making sure to cover all the vegetables.

Place this lot under the grill for about ten minutes until the cheese is browning and starting to bubble. Then remove from the oven and serve up! 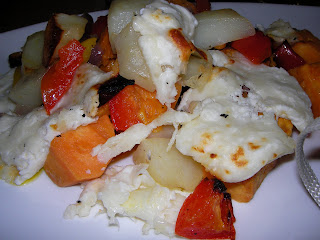 With the two savoury courses out of the way, I turned my attention to getting the pudding ready.

Thinking about it now, if I'd prepared the meringue in advance I could have sorted the pudding all out just a few minutes after the main course, but I didn't... That did mean that a decent amount of time was left between the main and dessert though, so we were more ready for it when it was done!

Without further ado then, for the rasperry meringue roulade you will need:

Preheat the oven to 150°C and line a baking tray (or swiss roll tin if you have one) with baking paper.

Making the meringue is a lot easier than people will tell you - don't worry about it and it'll turn out just fine.

Simply whisk the egg whites together (takes MUCH less time using an electric beater - best kitchen investment ever) until very stiff. At this stage start to whisk in the caster sugar a bit at a time until the mixture is even stiffer, forming peaks when the beaters are removed from the mixture. At this point sieve in the cornflour and beat for just a bit longer. 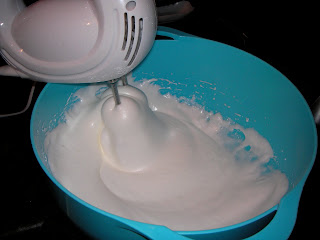 Once the mixture is sufficiently thick, spread it on to the lined tray to a depth of about 5mm.

Place the whole lot in the oven an leave it for about an hour. The meringue should turn a lovely brown colour and be crisp on the outside, but retain a softer, chewy centre. 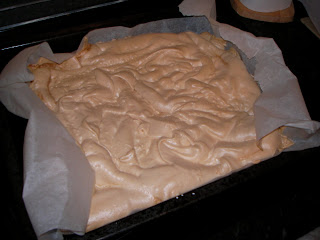 Allow to cool while you beat the cream until stiff.

At this point, lay another sheet of baking paper out and dust it evenly with icing sugar. Then turn the meringue out onto the dusted sheet so that the flat side faces upwards.

Spread the meringue carefully with the cream and then lay the raspberries across the top of this.

Finally, and very carefully, roll up the meringue using the baking paper as a support. Expect some cracking!

Mine turned out a little deformed, but it was still really good (if I do say so myself...). 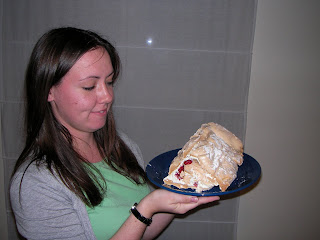 And that was our anniversary meal!

The whole lot came to about £14, which is brilliant value when you think that that's a three course meal for two (and the roulade will easily serve 8).

Maybe we'll never eat out again... or maybe we will because that much work every week or so is too much to think about!

- I bought some mascarpone cheese recently with a view to making some poached peaches with a mascarpone centre, so I may or may not get round to that.

- I also have a Crema Catalana recipe that I want to try (like a Spanish creme brulee). So maybe a couple more desserts on the horizon!
Posted by David at 05:37