Finally, the 28th August has come and gone (just!), and with it the Foodies Festival has passed. Following is a summary of what went on...

Claire, mum and I made our way into Oxford for the show I've been waiting for for a good while now. As usual, I made sure we were early... in fact, we were the first to arrive by about ten minutes!With most of the stalls still setting up, it meant that things were a little quiet when we first went in, but after half an hour of wandering round the various active stalls, the rest had opened up. 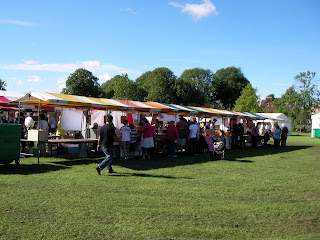 Having arrived at ten, we were able to register for the various attractions we most wanted to see which freed us up to wander round the event without worrying about getting in to anything, or not getting seated.

We signed up for the cupcake masterclass, the chocolate tasting session, Mark Chandler at the chef's theatre, and finally, a cheese tasting session (which we decided not to stay for).
With this out the way, we roamed round the vast majority of the stands until the cupcake class at 11.30.
There was a lot to see. Most stalls were local producers or local shops selling specialist produce. All sorts of oils, sauces, cheeses and meats were the most recurring themes, though there were some more unusual stalls... like the hemp stall, featuring everything from hemp cereal, to hemp chocolate, to hemp crusted cured meats. 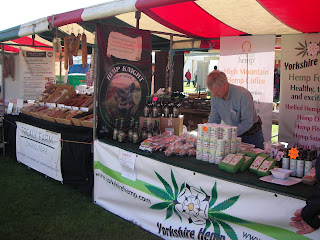 The one of most interest to me though, was the Chocolate and Love stand - a company which travels the world sourcing the best chocolate from all across the globe. They had an impressive arsenal to choose from, including the famous Amedei, but I was surprised to see omissions in the shape of Valrhona and Montezuma. Of course I made some purchases here - Amedei's 55% with almonds, and Chocolate and Love's own 'Crushed Diamonds', a 55% bar with crushed cacao nibs. This last is sitting very near the top of my favourites list at the moment (though I am loathe to give up the current top spot, Valrhona Guanaja).

There was a lot to see and do at the various stalls, not to mention all the free samples! Before lunch I'd already sampled a variety of sauces, oils, chocolates and olives. Many of the stalls were competing in the spicy market, from Italian dried chilli sauces to more standard Indian varieties. However, the biggest kick came from an olive spiked through the middle with a whole chilli. Very tasty, but very hot!

After our look around it was approaching time for the first attraction of the day - the cupcake masterclass with 'Holly Cupcakes'. 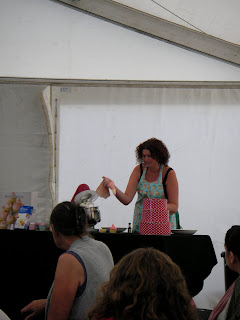 The session was not so much a cupcake masterclass as an icing and decorating demonstration, but it was a good laugh anyway.

Interesting decorations included some rice paper flowers and edible glitter. Much mess and hilarity ensued, as I'm sure you can imagine. Our finished creations are below: 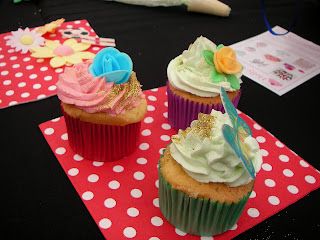 With the first class out of the way, it was back into the marketplace to finish having a look around the various stalls and to grab some lunch.

It being the Foodies Festival, the local restaurants and food places were well represented. From burritos, to Chinese cuisine, to paella and Mexican, most bases were well covered.
We finally settled on the Indian offering though, Chutneys Indian Brasserie. Mum and I went for the lamb balti, while Claire chose the chicken tikka masala. Both were especially good, and you can expect a full review of Chutneys at some point, as we'll definitely be going there to see the restaurant itself.

Having finished lunch, we still had about an hour before the chocolate tasting. If there was any complaint about the day, it was maybe the small size of the event - there were not a whole lot of stalls, and once you've been round them once, all there is to do is go back round again... and unless you have bottomless pits of cash, this isn't the best idea!

However, we were saved from boredom by the filming of a program for the Good Food channel. Matt Dawson of English rugby and Question of Sport fame was hosting a new game show, Monster Munchies. The challenge for the episode was for two teams to compete in creating the biggest, and best tasting trifle they could in 24 hours. The competing cooks were from Exeter College, Oxford, and the Anchor Inn. 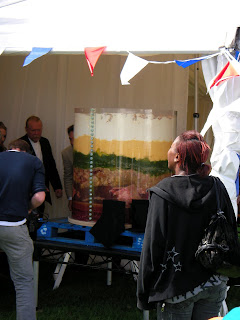 The first to be judged was Exeter College's effort, which I have to say was one of the most disgusting things I've ever seen. So gross, I don't even want to describe it, so you'll just have to look at the picture of it above. I should note that the moustachioed man in the background is TV's Iron Chef, and Michelin starred chef, Martin Blunos. He was one of five celebrity judges, and he also hosted one of the Chef Theatre slots later on in the day (we only managed to catch the tail end of it though).The Anchor Inn's effort was slightly more palatable (at least to look at), and deservedly won over the other monstrosity. I can't imagine any of the judges were especially pleased to have to sample either though. Below is a fairly poor image of the other trifle, also featuring Mr Blunos. 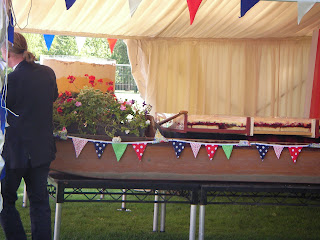 Watching all the filming took us pretty neatly on to our next pre-booked slot - this time the chocolate tasting. I was pretty excited about this as it was being hosted by the impressive Chocolate and Love stall that I mentioned above, and I was looking forward to trying out some of the more unusual brands I hadn't come across, as well as trying Amedei for the first time.
I was a little disappointed by the speaker, as I genuinely think I could have given a better summary of chocolate and the chocolate making process than she did. However, she led the tasting fairly well, and overall it was a decent session (though I was disgusted to note that Cadbury's featured on the tasting plate - I left that piece untouched). 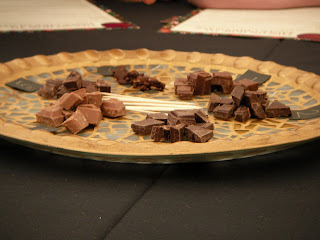 As I've said before, Chocolate and Love's own 'Crushed Diamonds' bar blew away anything else I tasted, though Amedei was good too. At the end of the tasting session the presenter held a small quiz, with correct answers being awarded a free bar of Chocolate and Love's Nirvanabar. Yours truly did indeed win one. It's true.

With the tasting out of the way, it was back to the stalls and the festival for one more hour until it was time for Mark Chandler's slot at the Chef's Theatre. I had picked Mark, mostly, if I'm honest, because he fitted into the timing schedule between some of the other attractions I wanted to see, but aside from this, he was one of the more local chefs attending (based in Fyfield), and as a self taught chef I was interested to see his take on things.

Mark had chosen to demonstrate one of the most popular dishes from his restaurant (The White Hart, Fyfield), the salmon Gravlax. 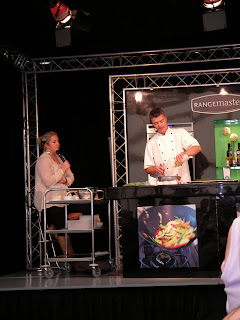 It being his first ever live demonstration, I thought he did very well, clearly outlining every step of the process and even cracking a couple of reasonable jokes. A lady on stage continually fielded questions to keep the dialogue moving, and overall it was a very entertaining piece. There were plenty of samples of the finished dish to go round at the end, and it really was fantastic. The sweet cucumber base complimented the well seasoned salmon, with the home made mayonaise really rounding off the canapés.

It was however a little short at just under half and hour, but by this point in the day we were flagging a little and were ready to go home. This was one of the main reasons why we didn't stay for the cheese tasting (though it would have also meant yet another hour wandering round the same stalls!).

Small as it was, the day had been excellent (not least because of the fantastic weather), and for the price (£10 for three day access to the event - there are different masterclasses and chefs on across the bank holiday), it was an absolute steal. Well worth a visit and I'm already considering making it a yearly venture. 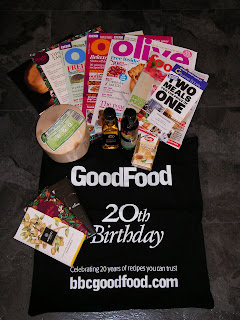 I thought I'd finish by detailing my various acquisitions from the day:

- 3 bars of choclolate: 2 bought from Chocolate and Love, the 'Crushed Diamonds' and Amedei's hazelnut bar, as well as the one I won from the tasting quiz.
- A fresh coconut with the husk stripped off. A bit of a gimmick, I know, but it was delicious and the coconut water was divine.
- Three copies of Olive magazine (on a special deal at the BBC Olive stand - with free bag and seeds and other such goodies - man must I sound like a girl after that one...).
- A couple of posters I nicked from the Chocolate and Love stand.
- Some rapeseed oil and some of the best balsamic vinegar I've ever tasted.
- And finally, the most interesting one, was a two month trial membership to the Gourmet Society. This entitles me to all sorts of benefits from tons of restaurants around the UK - from two for one, to fifty percent off for a group, free drinks - all sorts of things! Free for two months, so we'll be making good use of that.

Do pay a visit to the festival next year (or even Sunday or Monday this year if you're not busy!) - you won't regret it!

- I don't know... nothing planned, but maybe some restaurant reviews, or some details if I cook anything interesting - eyes peeled people!
Posted by David at 16:28