Hello folks - it's been a while since I've updated, and I don't really have an excuse. Just hadn't got round to it until now.

A couple of weeks ago I travelled up to St Andrews in Scotland for work and thought I'd use the time to have a couple of food experiences!
(Please excuse this blog if it doesn't make a whole lot of sense - it is currently 03:15... I think I might come back and edit this later.)

The first was, of course, to visit the famous B. Janetta's Ice Cream Parlour. 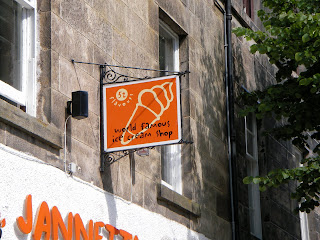 It is renowned throughout Scotland as one of, if not the, best ice cream places in the country.
I have to add here, that this is not my opinion - Nardini's in Largs tops the chart for me, but it has added nostalgia for me.
Anyway, the shop itself is constantly busy, but there are plenty of staff on, and I got served quick enough. With 52 flavours to choose from, it's pretty tough to decide what to have. 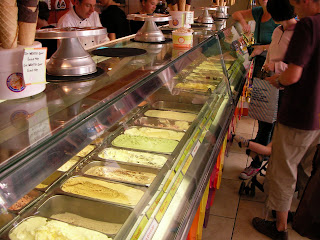 Eventually though, I made up my mind to go for three scoops. One each of Snickers, pistachio and turkish delight. The turkish delight was particularly excellent, but every flavour I had could have been easily identified for what it was supposed to be. 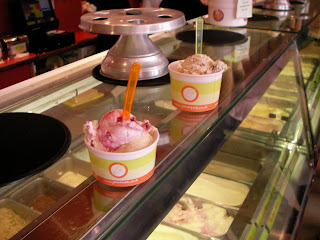 Attached to the ice cream parlour, there is also a cafe owned by the Janettas where I had lunch. As the place is so famous for its ice cream, it would only have been right to have a soda float to accompany my lunch... Irn Bru it was... 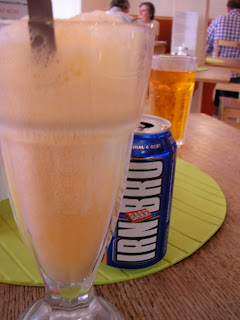 The cafe wasn't great. In fact it wasn't even good. The menu wasn't very varied, and the food itself wasn't brilliant. However, the main attraction - that is the ice cream - is superb. If you're ever in or near St Andrews and you fancy an ice cream, it has to be from here.

Second on the list was to try one of the fudge doughnuts from the Fisher & Donaldson bakery in St Andrews. My work colleagues are all very fond of these from when they have been working in St Andrews, so it was my duty to see what the fuss was all about.
You'll have to excuse the poor quality photos for this part, as they were taken late at night in my room after a full day's work.

Anyway, these doughnuts are pretty large, and they have the most phenomenal amount of fudge icing on the top. 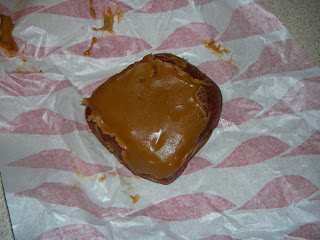 This would be fine had the filling been fairly anonymous, or if there wasn't one at all. However, there really isn't a lot of doughnut in the doughnut... more custard with a very thin wall of pastry holding it in. 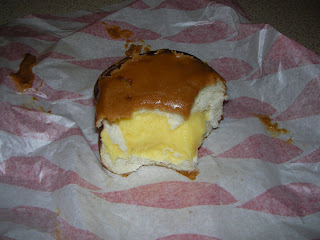 This was my second one (not right after the first - honest!), and I'll admit that I could not finish it. It really is too much, and I can't believe that the people at work like them so much. It makes me feel sick to think about it now! If you fancy the experience though, do give it a shot - it must be one of the most calorific cakes that money can buy.

So, that was the foodie side of St Andrews - not too bad for a wee, small town in Scotland.

I'll conclude with some follow up to the last post, and another round up of what's to come...

I didn't have another go at the cake for my colleague's son. I know, bad show, right? Anyway, she had a go at it herself, and had little more success than I did. Her cake turned out okay over all, but I think (please feel free to correct me if I'm wrong in the comments there, Tanya) that she had the same problem with the oil seepage at the icing stage.

I think that it's probably best not to use the recipe I posted! If anyone can get the original to work though, do post up how you did it!

- My mum, my wife and I (and maybe dad... phone call misunderstanding) are all going to the Foodie Festival in South Parks, Oxford next week. I'll be writing up a comprehensive report of what I get up to with plenty of pictures. Stay tuned!

- Whatever else interesting I'm making in the next few weeks... I made some cakes the other day, but forgot to take pictures etc. Maybe another time!
Posted by David at 19:11