This is one of Claire's favourite dinners that I make... I've been a wee bit apprehensive about putting it on here, as it's a bit of a cheat (gravy granules and all that), but they can't all be restaurant gems, can they?

The stew will serve three to four using the quantities below:

- 2 small / medium onions
- 3 carrots
- 8 sausages (skinless is better, but not essential)
- Gravy granules - you could make gravy from scratch if you wanted
- 3tsp cornflour
- Plenty of pepper to season

Start by preparing your vegetables. Include potatoes in this if you are going to serve mash as an accompaniment. I usually do, but because I recently put a mash recipe in here I'm not going to duplicate. Just roughly chop the carrots and onions. 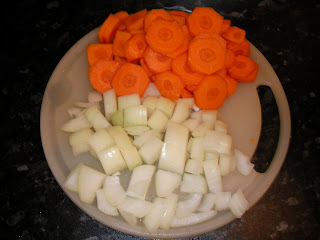 The cooking begins by frying the sausages off in a little oil. Use a large pan - the whole stew is a one pot recipe. Skinless work best for the recipe as skin on the sausages tends to peel off later in the cooking process and float in the gravy... not so nice. 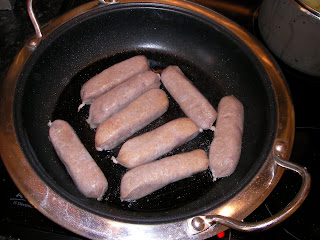 Once the sausages are just browning, add in the onions and sweat them off. As they start to colour, turn on the potatoes to cook and throw the carrots into the stew pan. Grind plenty of pepper on top of the whole lot - no salt for this recipe as the gravy provides all you'll need. 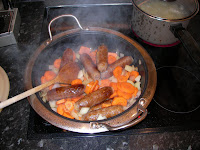 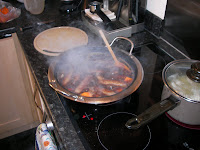 Give the carrots a couple of minutes before lowering the heat on the pan. Make up the gravy (about 1 1/2 pints is good) and mix it with the corn flour to thicken it. Pour this over the sausages and veg.

Put a lid on the stew and let it simmer for about twenty minutes while the potatoes for the mash finish boiling.

Prepare your mash and then lay it in bowls as a base for the stew. Then ladle generous portions of the stew over the top. A great winter warmer. 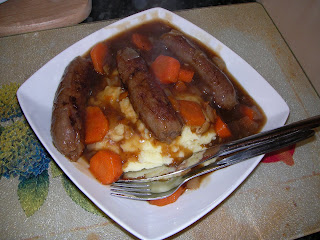