So I said that I wasn't going to blog about the pork chops because it was too easy... but then I changed my mind. Besides, I made a cake this evening too, so if the pork isn't good enough, then at least there's something else!

It was pork chops for dinner then, with mash and sugar snap peas. 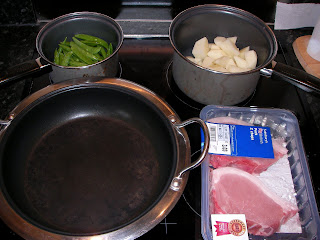 The potatoes take the longest, so I always start with those. Prepare them by first peeling before roughly dicing and putting them in a pot. Just cover with water and bring to the boil (or, like I always do, boil the kettle and pour the heated water over the top before bringing up the heat on the hob).

While the potatoes are boiling, heat up some oil in a heavy based pan and prepare the pork chops by putting plenty of salt and pepper on both sides and patting it gently in.

Lay the chops in the pan once the oil is hot and leave on one side until it is well coloured. 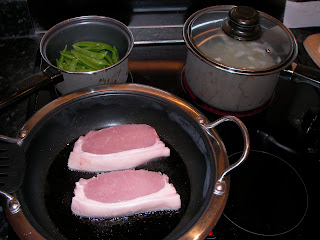 Once one side has been properly cooked, flip the pork over and start to bring the sugar snaps to the boil too. Be careful not to leave the peas in the pan too long, and not use too much water as they are easy to water log and become soggy.

Once the pork is cooked through, take it off the heat and allow to stand while you prepare the vegetables. Drain off the potatoes and peas and start to make the mash. 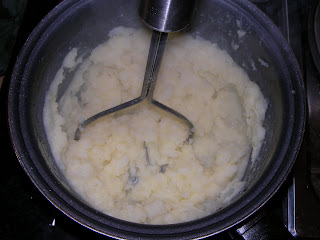 Mash is devastatingly easy. Just a splash of milk and as much butter as you like. If you think you have enough butter in there, you're wrong. Add a little more to make sure. Then grind in some pepper and plenty of salt and just go to town on the spuds with the masher. Work it until it's smooth all the way through.

Now it's time to plate up. One chop each, plenty of mash and a good helping of sugar snaps. Finish with a generous couple of tablespoons of the apple sauce from the last blog. 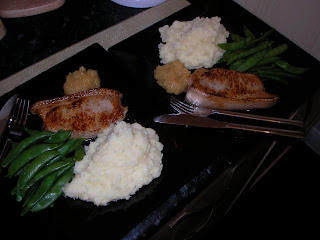 Having done with dinner, I just had time to put together a cake before I went out to play football.

I know I've been updating really regularly recently and doing a lot of cooking - but it's all for a good reason. I haven't mentioned on the blog before, but I applied to go on Masterchef UK a couple of weeks ago, so since then I've ramped up my efforts and have been cooking and studying every opportunity to try and better my abilities.

So it was then, I decided to bake another cake to bring in to work (lucky colleagues, eh?).

I went for Willie Harcourt Cooze's Cloud Forest Chocolate Cake. Willie is a self made chocolate producer based in England who sources cacao beans from the world's best cacao growing regions. He is most famous for his 100% regional bars - one of which goes into the making of the cake.

The bars are stupidly expensive (I think about 5 or 6 pounds), but thankfully I had one sitting in the cupboard that I wasn't otherwise using. It's been there a while...

Alright, you will need: 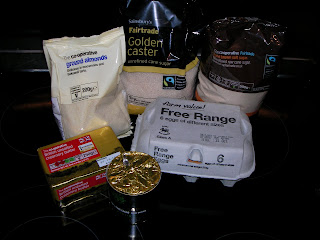 Start by grating the chocolate into a bowl and then mix it through with half the golden caster sugar, all the muscovado.

Melt this all over a pan of hot water with the whole block of butter - best to slice it up first for quicker melting. 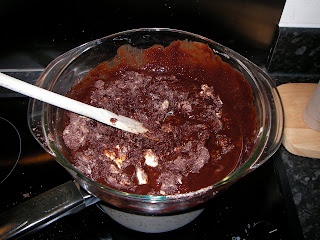 Once the mixture has melted down into a smooth, glossy liquid, take the pan off the heat but leave the chocolate over it while you turn your attention to the eggs.

Crack all six eggs into a large mixing bowl and beat them together with the rest of the caster sugar until it has tripled in size. This can take a while if you're not using electric beaters. 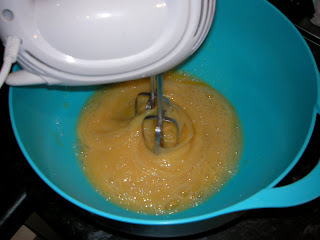 Once the eggs are beaten, start to fold the ground almonds into the chocolate mixture a bit at a time.

Once completely folded in, then combine the chocolate mixture with the eggs, again slowly, folding in gently so as to keep the lightness in the mixture. 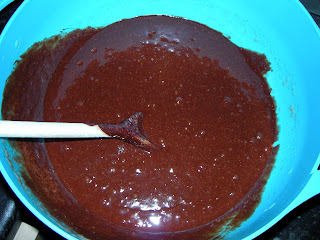 Finally, pour the resulting mixture into a greased 10" cake tin and put it in the middle of an oven preheated to 160°C for about half an hour.

The resulting cake should be firm, but almost torte like. 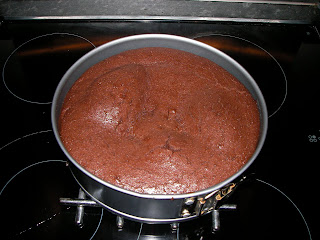 Allow to cool in the tin for around half an hour before removing and allowing to stand for a little while more until completely cool.

It's wrapped up in tinfoil at the moment, ready to be iced in the morning before I go to work. I'm going to do a chocolate butter cream to top the cake - butter, icing sugar and Valrhona cocoa powder. Only the best.

- Like I say, I've recently applied to be on Masterchef, so regardless of whether I get picked or not I'll have to put in a ton of practice in the event I actually make it!

- I'm also planning a Thanksgiving Dinner this year. Just something a little different. it's supposed to be the fourth Thursday in November, but due to time constraints and the amount of cooking involved, I'm thinking I'll have to do the 27th instead. Looking forward to it though.
Posted by David at 15:19