Last night I was very much in the mood for cheesecake - probably my favourite dessert. I'd never made one before, so it was time to give it a shot. I went for the New York style cheesecake, which, in my humble, but entirely factual opinion, is the best kind. 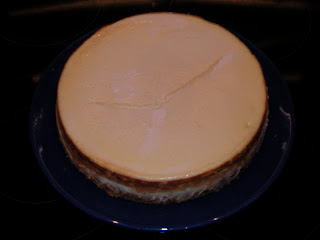 Starting with the 'finished' photo up the top - unusual, I know! Thought I'd mix it up a bit. Can't be having the blog going stale.

The New York cheesecake is one of the baked varieties, and also contains soured cream rather than double cream. This makes it better for freezing... not that that's going to matter to me - it'll be consumed quick enough! The only variation I have made to the classic here is to substitute a graham cracker base for a more British (and more widely available!) digestive biscuit base.

The cheesecake is made in two parts - the base and the filling. Start with the base...

For the cheesecake base you will need: 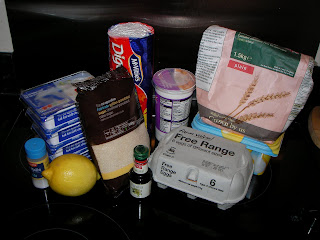 First, you'll want a 10" springform cake tin for the cheesecake. You could use a standard 10", but because of the consistency of the edges, a springform is really the easiest to take off after baking.

Anyway, take your tin and wrap some baking paper round the base before closing the sides around it. This will keep a tight, greaseproof base under the cake, and the overspill paper will allow you to slide the cake off the tin and onto a plate easier at the end. 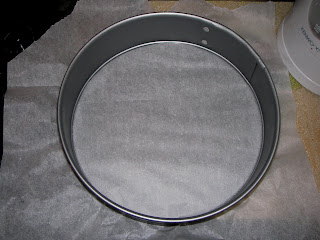 All this aside, crush the digestives (I found a potato masher to be particularly effective) and set them aside. Next heat the butter in a pan until it's all melted and then add the sugar. Allow the sugar to start caramelising before mixing in the biscuits. They don't need to heat up at all here - just make sure they're well covered in the liquid and start to all stick together.

Once the mixture is thoroughly sticky, press it onto the bottom of the cake tin. Heat the oven to 180°C and bake the biscuit base for 10 minutes. Start to prepare the filling while the biscuits are in... 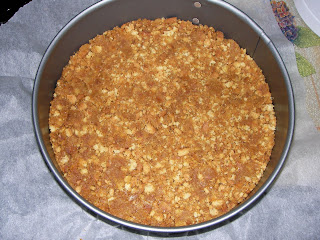 For the filling you will need:

Start by beating the cream cheese all together until it's smooth and creamy. This takes a good few minutes. Once that's done, beat in the sugar, flour and salt. 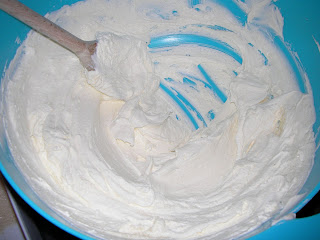 Once these are well combined, switch to an electric whisk (or a normal whisk if you have a spare hour...) and beat in the eggs, one at a time, at a slow speed followed by the extra yolk. Then beat in the vanilla essence, lemon juice, zest and lastly the soured cream. Make sure it's all mixed through and that no lumps have formed around the edge or bottom of the bowl. 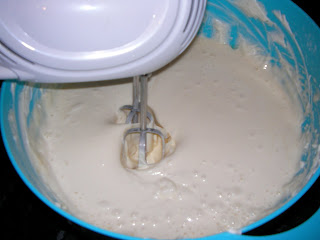 Simply pour this on top of the biscuit base (which, by the way, will have been out of the oven and standing to cool for fifteen minutes or so by this point). Wait for the oven to heat up to 240°C before sliding the cake in to bake for 15 minutes. 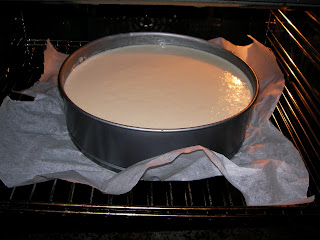 After fifteen minutes, turn the oven down to 150°C for the last 20 minutes.

Because of the coagulation of the eggs in the batter, the filling has a tendency to split when cooling. You can attempt to avoid this by slow cooling the cheesecake in the oven - that is to say leave the door closed once the oven has been turned off and allow the cake to cool down with the temperature of the oven.

If you prefer your cake a bit more moist in the centre, leave the door slightly ajar while it cools. This process can take a couple of hours.

Once cooled, stick the cake (well wrapped) into the fridge for 8 hours or so. Then slice and serve a seriously nice piece of pudding... 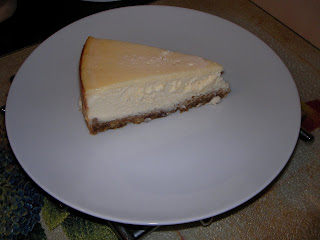 - Going to mum's this weekend, so may take a wee peek at what she's cooking and put up some ideas.
- Still planning for the possible Thanksgiving dinner, finances are tight, so we'll see how that goes!
Posted by David at 10:33