There's been a bit of discussion in the kitchen at work recently (admittedly, mostly because of me) about how to make a perfect poached egg.

You see, coking for so many means that we do things as easily and efficiently as possible in the kitchen. This is fair enough and I understand the reasoning. So we use little metal rings to hold the egg in place in a large pan full of water. Nice and simple.

But I think the look of the eggs is all wrong when it's done like this. The picture I have in my head is one of the fluffy looking, oval shaped eggs served up over an English muffin, Parma ham and covered in hollandaise sauce. Eggs Benedict of course.

To achieve that, I've had a good scour round the internet to see what peoples' methods are. There are a couple which are prevalent.

The first has been attributed widely to Delia Smith. She uses a technique similar to that we use in the kitchen - shallow frying the eggs in water. In Delia's case though, this is done without the aid of the metal ring. Results from this technique seem to be sketchy at best though, and as it's similar to what we already do I thought I'd look a little further.

The other method which I've seen a few times is most often referred to as the vortex method - and it's this one that I had a go at.

The idea is to crack your egg into a shallow bowl or cup while your water gets up to the boil.

Once your water is at a rolling boil, take a whisk and rapidly stir the water until you have a whirlpool in the middle of your pan. Drop the egg into the centre of the 'vortex' and the yolk should stay fairly steady while the white is pulled round it to form the poached egg. 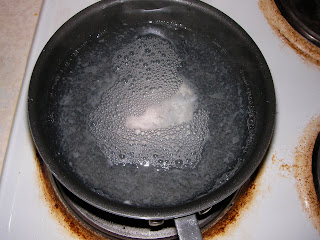 The technique is difficult at best though. I had five goes before I managed to make an egg that I was vaguely pleased with. If the water is spinning too fast then fragments of the white start to spin off and the egg loses it's shape. Too slow and you end up with the egg sitting at the bottom of the pan and frying off in the water.

I think I'm getting closer though. Maybe a few more tries and I'll crack it - pardon the pun!

For now though, five goes is quite enough. 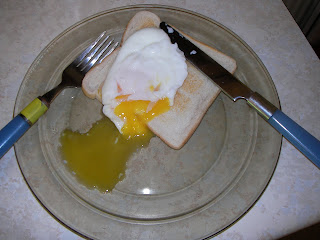 What I am wondering though, is whether or not anyone has any other methods for poaching eggs, or a little tweak to the 'vortex' method above that might help?

Any suggestions are welcome!