Hello folks. It's been a fair wee while since the last blog, and to be honest, I think it'll be this way from now until I finish with this job.

With a lack of mobility, and the fact that all my meals are provided, then the ability to get ingredients and the need to cook (other than at work) has been greatly reduced. But, like today, when I do occasionally put something together I'll let you know...

Unfortunately, the internet up here is still absolutely dire, so again I've only managed to get a couple of pictures up. Hope that's alright!

I made a few mistakes in putting together this dish - primarily not consulting a few recipes beforehand to get an idea of what I was doing - but it came out okay. And I'll put a couple of markers down as to how to do it better...

You will need (serves about six):

I used a glass of wine, but really that was too much. A few tablespoons would have been more than adequate. You really just want to make a glaze for the fruit, but I ended up with something more akin to punch - though it still tasted pretty good. 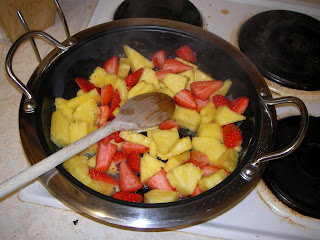 Start by melting the butter and sugar together to form a little caramel. Then fry your fruit (I used pineapple and strawberry, but really anything works. Drunken plantain is popular, and for that you substitute the wine for rum) in it for around five minutes at a fairly high heat.

Bring down the heat after the fruit is cooked through and add the wine to the pan. Bring up to simmering point and slowly cook off the alcohol for around ten minutes until just the flavour of the wine comes through. 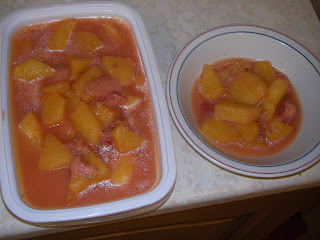 And that is that. Very simple, very quick, but very tasty too. Like I say, bringing down the amount of alcohol you use will mean that you get a glaze on the fruit rather than a very thin sauce, which would be much better. Also, strawberries don't hold their shape after a lot of cooking, but they do colour the sauce very well. Again, reducing the amount of wine in the dish would mean that cooking off the alcohol would take less time and the strawberries would have come out better. But you live and learn - experiment a little and enjoy!

Coming up:
- I'm going to try to get hold of some chicken livers from the butcher at some point.
- Also got my Christmas menu nearly sorted - will be starting the Christmas cake at the start of September!
Posted by David at 01:33