**Edit: Since posting this, I have managed to salvage a picture of the cake - only one - but hey. It's something.**

So I've had my first David Disaster for a little while. Thankfully it's not so much to do with the food I've made this time... More just that I dropped my camera on my way through to the PC and it formatted the memory card. So I have no pictures of my cake to share! 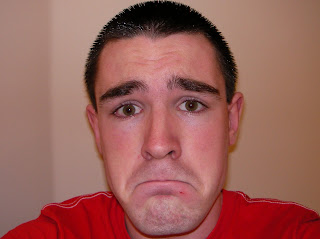 Yoghurt cake is one of the recipes that I've used a few times - one of the first ones that I remember mum showing me how to make. Mum tends to make orange or toffee flavour.

Having passed on the recipe to me, I then passed it on to a colleague at work a couple of years ago. She experimented with it by using cherry yoghurt instead of orange or toffee and also added cocoa powder to the ingredients to make a chocolate and cherry cake.

After a wee chat with Heather from work today, talking about how the recipe could be furthered again, I decided to have a crack at a sort of faux black forest gâteau. Here's how...

Yoghurt cake is a spectacularly easy cake to put together - one of my favourites as you can do everything in practically one bowl.

With the modifications for the 'black forest' version, it needs a little more work, but still very easy.

Then grab a large mixing bowl and mix all the dry ingredients (flour, sugar and cocoa powder) into it, making a well in the middle. This is where a picture might be handy, but I'm sure you see what I'm saying.

Add the yoghurt, oil and egg into the well and fold the dry ingredients into the middle from the outside, combining everything together. Start to work the mixture faster once the batter starts to come together. Make sure that no lumps are present when you've finished beating the mixture.

Pour the cake batter into your loaf tin and put it in the oven for about half an hour or so.

While the cake is baking, whisk the cream in a bowl until it's very thick. Set this in the fridge until you're ready to use it later.

Once the cake is baked, take it out the oven and leave it to cool for a while in the loaf tin. Once the cake has cooled completely, turn it out of the tin and slice it in half lengthways, leaving you with two layers.

Take your cream from the fridge and put it into an icing bag. Pipe half the cream onto the bottom layer of the cake.

Take a spoon and dig a trench into the top layer of the cake, making sure to leave enough of a wall round the edge to contain a reasonable amount of filling. Once carved, set the top layer onto the bottom layer before spooning your cherry filling into the cavity.

You could use fresh cherries, cooking them down with sugar, water and a little lemon juice, but for the sake of economy I used a tinned version.

Finally, pipe the rest of the cream onto the top of the cake, covering the cherries completely.

Below is the picture I managed to salvage. It's the cake before the cream has been piped over the cherries. Not a brilliant picture, but the best I can do! 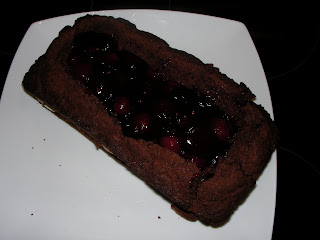 My apologies again for the lack of pictures here, but for those of you from work who read this you'll get a chance to see it tomorrow anyway.

I will admit just now that I was a little over enthusiastic when carving the top of the cake and it's collapsed somewhat. Currently being held together with tinfoil... We'll see how it's doing in the morning.