Having been inspired by the wonderful culinary works of Raymond Blanc the other day, I thought I should have a go at the pistachio soufflé which was by far the showpiece of the Brasserie. I had a couple of able accomplices in my good friends Deon and Alta. Though Deon turned out to be a bit useless. Not really. Well, a little bit.

I couldn't find a recipe I liked for the dish. I was looking to at least vaguely recreate Raymond's soufflé, but none of the pistachio recipes seemed to be quite right. In the end I modified a chocolate soufflé recipe to suit.

You will need (3 soufflés):

Start by preheating the oven to 220°C. Then grease your ramekins with the butter before coating them with cocoa powder. Shake out any excess powder. I'm fairly sure this is what Raymond will have done with the ones we ate in the restaurant - there was a thin coating of chocolate round the outside of the soufflé when it had risen, and I'm sure this is how he did it. 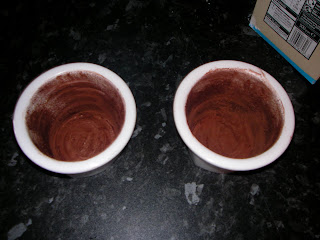 The next step is to boil up the milk and cream. While they're heating together, whisk up the egg yolks and half the sugar until they're pale and well combined. No lumps!

Once the cream and milk has boiled, whisk in your egg yolk mixture and then lower the heat on the pan. 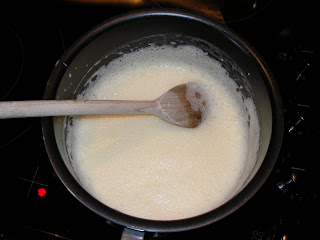 Stir well and then add in the cornflour, again stirring well to ensure there are no lumps. Let this thicken a little and you have the custard base for your soufflé!

We set Deon to work grinding up the pistachios. Raymond's soufflé didn't seem to have any pieces of pistachio in at all, and to be perfectly honest I'm not sure how he got the flavour and colour so perfect without adding any pieces to the mixture. Perhaps extract from the nuts. Unfortunately this is something I don't have access to, so instead I just used my cocoa bean grinder to get the nuts as small as possible. Almost to a praline type paste. 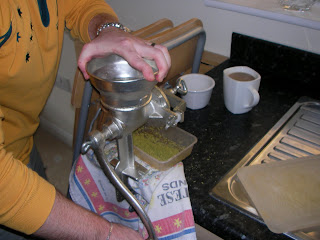 Deon was working so hard that he even had time for a coffee. And managed to spill the pistachio everywhere. But that's okay - mine is a forgiving kitchen.

While the pistachios were being ground and spilled, Alta whisked up the egg whites, adding the rest of the sugar and whisking again once stiff peaks formed when the whisk was removed. 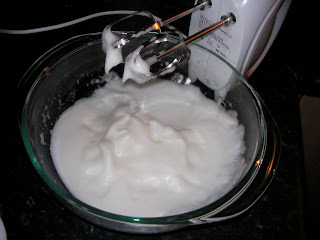 With the custard off the heat, fold in the egg whites, mixing the two together well without losing any air or volume from the mixture. Fold in the ground pistachios too and spoon the mixture into the ramekins before putting them into the oven. 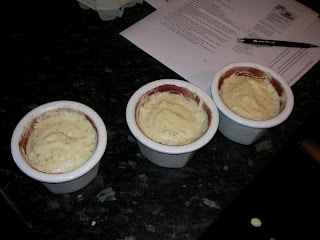 After ten minutes, the soufflés should have risen well and browned at the top. The chocolate around the sides will have melted and risen with the soufflé giving it a sticky, chocolatey coating round the outside.

Quickly move the ramekins onto plates and dust the top of the soufflés with icing sugar before they start to collapse. Serve immediately! 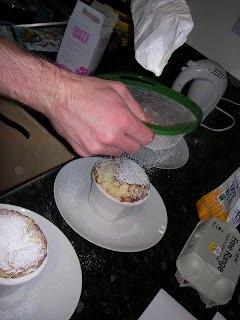 I certainly didn't attain the standard of dessert that we got from Brasserie Blanc, but for a first attempt it certainly wasn't bad. Even though the pistachios were ground very finely there was still a little crunch that took away from the overall texture. I perhaps should have left them in the oven a little longer as well, but overall not too bad. I got a good green colour to the centre of the soufflé and the chocolate worked very well. 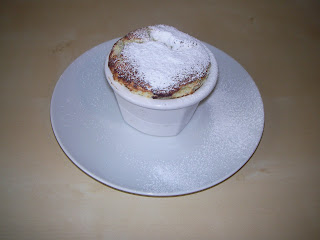 A few minor tweaks and I'll be in business.

Thanks again to Deon, Alta and Josh for another lovely evening. I haven't mentioned Josh 'til now, but he was there.

Just wanted to share a few of the little blessings I've received from some of my lovely friends as going away presents recently to show my appreciation for these wonderful people. All culinary themed gifts... you'd think I was going to do a job in cooking or something... A Scottish slang apron from Lynda, bearing more than just the word numpty. Honest. Something to wear in the home kitchen up north as I'm sure they won't allow it at work...

Also a little Moleskine recipe journal from Kym-Marie. A beautiful little book for taking notes on food, recipes, all the stuff I'll want to be taking notes on.

And finally Raymond Blanc's Kitchen Secrets recipe book from Liz. A fantastic recipe book and a wee reminder of a great night out with some of my best friends.

Thank you everyone for all the love and support you've shown me before the move!

Coming up:
- Back to not sure. No plans at the moment - see how the next week pans out...
- I think this blog is going to go through with no formatting issues. Hooray.
Posted by David at 14:38