Hello everybody. I haven't been doing a lot of cooking recently, so I've not much to put up at the moment.

I did, however, find a particularly brilliant cookery book at the market on the weekend...

For a pound, I couldn't resist. What a bargain - The Children's Cookery Book from 1978.

Not only is it the most awful set of recipes I've ever seen, but the pictures are creepy, and the two children who populate the book's pages are very scary indeed. This all adds up to make it the best cookery book of all time. 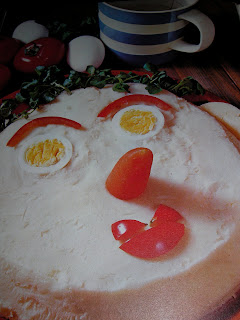 That's right. A mashed potato face. The worst thing about this particular monstrosity is that it does not even teach the children how to make mashed potato - it instructs you to use instant mash... What?! Unbelievable. I refuse to believe that children of the 70s were incapable of peeling and boiling spuds. 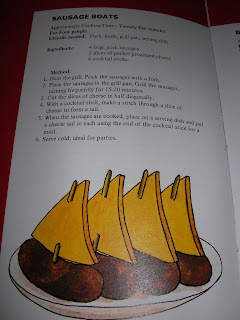 Another particularly ridiculous recipe was for 'sausage boats'. And yes you are reading the recipe correctly. Sliced, processed cheese. Filth. What sort of cookery is this? The book does have a couple of redeeming qualities though. 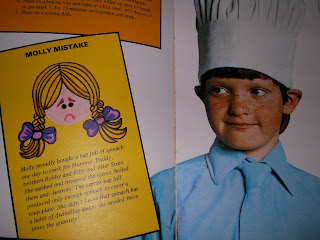 First and foremost are the scary children. They just make the book a wee bit special... Ha. Aside from that though, is the Molly mistake section. On most pages there's an illustration of the world's most unfortunate wee lassy, who just doesn't have a clue how to cook.

I've decided to take this on board in the blog - from now on, if I have a howler in the kitchen, it goes in. And I'll find a wee picture to go with it. I'll call it a David Disaster. 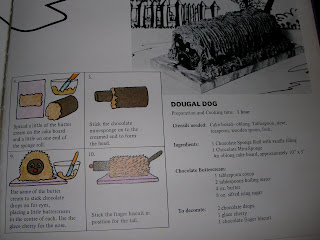 To finish though, a fantastic recipe that does it's best to salvage the repertoire of the book. I say fantastic... but it's only fantastic by the rest of the book's standards. Let's be honest though, a cake made to look like Dougal from The Magic Roundabout has to be a winner. I might even make this for work...

Email ThisBlogThis!Share to TwitterShare to FacebookShare to Pinterest
Labels: book