So, it's been a fair wee while since I blogged. Looks like December's going to be the lightest month in terms of blogs this year. Ah well.

This one's a cracker. Or at least the food is... the writing may leave something to be desired.

Starting with the honey glazed chicken then. I winged it a little on the glaze, so I'm really not sure of the quantities. 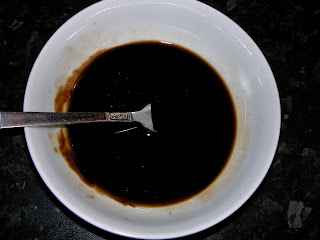 I mixed about two parts honey to one part balsamic vinegar. Threw in a dash of worcestershire sauce to cut through the sweet taste and crunched in a good cracking of black pepper. Mix it all thoroughly together with a little water (just enough to get a good consistency for pouring) and there you have it. I was cooking ten chicken legs, so I made about enough to fill half a small dessert bowl.

The chicken is very easy to prepare. Take your drummers and score through each one a couple of times right down to the bone. This will allow the chicken to absorb more flavour from the glaze as it cooks. Ideally, to get the most flavour, you would marinade the chicken in the glaze for a few hours. 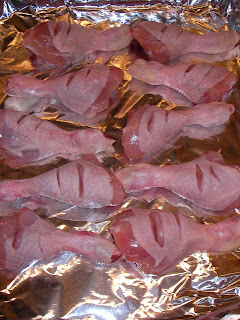 Heat the oven up to about 180°C before putting in the chicken. It'll take around 30 minutes to cook through. Brush the glaze onto the legs and pour any excess over the top before putting them into the oven. 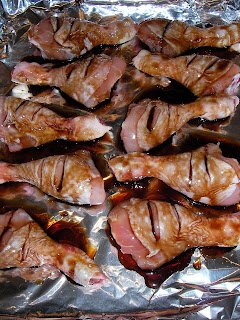 Every ten minutes, pull out the chicken and baste the legs with the glaze that has run off.

When it's ready, serve it up... I went with some sweet potato mash and sweetcorn. Then I realised that this made the plate decidedly yellow.

For the mash I just boiled the potatoes before mashing them up with a lot of butter, about 40ml cream, a pinch of salt, and a good cracking of pepper. 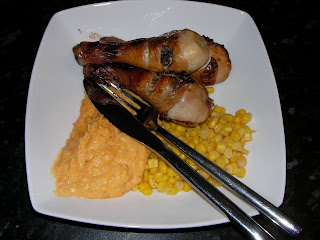 Then it was time for pudding...

With the cold weather, there's nothing for it but to make hot, filling puddings. Yes.

For rice pudding you will need: 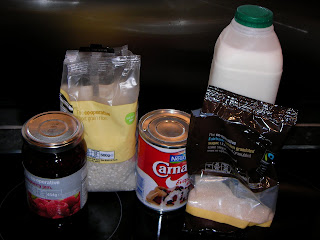 This is a spectacularly easy pudding to put together. You hardly have to do anything.

You need an oven proof dish, maybe about 10" long and at least 2" deep. Lay the rice in the bottom with the sugar before pouring on all the liquid. Then float little chunks of butter on the surface. 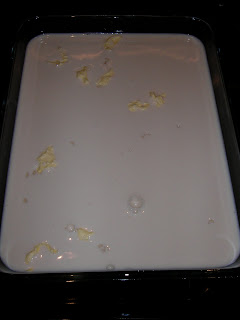 Heat the oven to 150°C and then place the whole lot into a shelf somewhere in the middle of the oven.

Leave it for half an hour before giving it all a good stir. Then leave it for another half hour before stirring it all again. Then repeat one more time. The last time, the rice should be starting to absorbing the milk and swelling up. Make sure it's not sticking to the bottom before putting it back in the oven for the final half hour (that's 2 hours total cooking time). 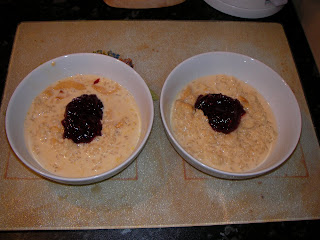 Give the lot a good stir before serving into bowls. Apply jam or other toppings liberally.