This weekend was the inaugural occurrence of the Oxford Chocolate Festival. Chocolate is just about my favourite thing on the planet, so with the event taking place practically on my doorstep I just had to go along.

The fact that the admission was free was always going to help...

The festival was held on Broad Street, right in the middle of the city of Oxford. Pretty easy to get to, and in a pedestrian area as well. 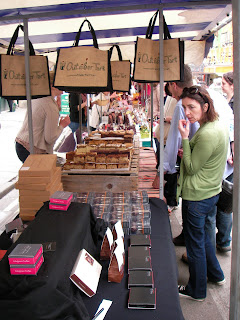 The first thing I noticed though was just how small the festival was - there couldn't have been more than about 10 stalls in the place. Considering the volume of people that go through the area every day, I would have thought that more of the smaller chocolatiers would have wanted to have taken advantage of the publicity and business that such an event would have offered. Indeed some of the exhibitors listed on the website I linked above weren't there (though I only attended the Saturday, they may have been there today). Maybe It's because it was the first one to be held in Oxford, I don't know. But I hope it's bigger in the future.

Those businesses that turned up though put on a reasonable display and variety of goods and demonstrations for the attendees.

One of the more interesting stands was the one operated by Chocolution. With a talk on how to make chocolate from scratch, lots of unusual products (like chocolate filled, decorated hen's eggs, cacao pods and so on), and an entertaining spokesperson, they were definitely the stand-out business of the event. 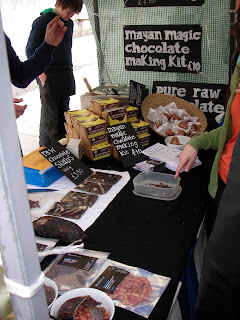 That said, their policy on promoting chocolate as a health product has always been something that rankles with me. While it is true that 100% pure cacao has proven health benefits (being an anti-oxidant, etc), I felt they were taking the idea a little far - manipulating the chocolate at lower temperatures to maintain minerals and vitamins and so on in the chocolate making process. This must only take away from the flavour of the finished product which is surely what people buy chocolate for?! Having purchased one of the hen's eggs, I'll have to decide what I think of the chocolate when I eat it. I hope it's better than I think... Well done to them though for trying to do something a little different than usual.

One of the bigger stands was held by Co Couture, a Belfast based company that operate out of a little boutique in the city. Having flown over that morning with all their gear, the folk manning the stand were understandably tired, but still up for a good chat about the business and their wares. 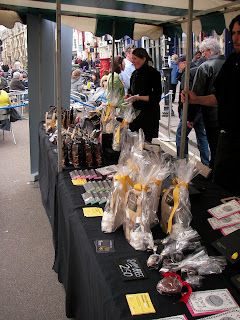 Their chocolate was a little more mainstream than Chocolution. Like most stalls, they'd opted (somewhat inevitably) to cash in on Mother's Day and Easter, offering an array of aptly themed chocolates. Apart from the more commercial products, they also offered various signature bars and their award winning truffles.

As well as all the chocolate stalls, there were a couple of other food stalls, notably a churros stand, a Mexican food stall and a wonderful continental bakery.

The absence that I felt was the biggest loss to the event was Montezuma's. Like I say, I wasn't there today, so it may just have been that they were only scheduled to turn up on the Sunday. They are one of Britain's more recognizable gourmet brands though - and deservedly so. I think they are the best UK chocolate manufacturer. While their chocolate is readily available at most supermarkets, I always find a trip down to their shop in Spitalfields Market, London to be an absolute treat. Their butterscotch 54% bar sits at number three on my list of best bars.

There were a few other chocolatiers present I haven't mentioned, but you might get a wee glimpse of what else there was if I show you what I bought! 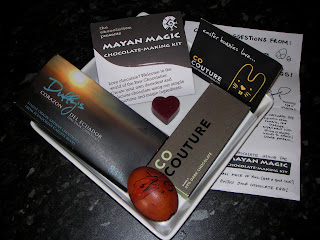 As I've already said, I picked up one of Chocolution's hen's eggs. Also from there I grabbed a couple of flyers - one with their chocolate making techniques, and another on how to make your own chocolate filled hen's eggs.

From Damian Allsop's stand, I just had to have one of his salted caramels in dark chocolate - salted caramels are the absolute pinnacle of chocolate heaven. No picture of this one - I ate it before I got home. They really can not be beaten. If I'd had a few hundred pounds to spare, I'd have been very interested to try more of his range. He's a ganache specialist, employing unusual techniques, removing cream and butter from his recipes to give a fresher, cleaner taste to the chocolate. Check him out.

The other pictured delights are a bar of 83% Ecuadorian chocolate from Red Star Chocolate (who make one of the most delicious milk chocolate bars I've ever tried), a passion fruit ganache from Paul Wayne Gregory and finally a 69% signature bar from Co Couture which is so delicately designed (even featuring a little gold leaf in one corner) I hardly want to eat the thing! 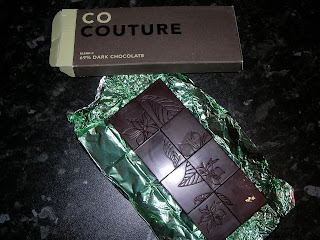 All in all, the festival is a good way to kill an hour and see some of the up and coming chocolatiers from the UK. For foodies, it's definitely not to be missed - just hoping it's a little bigger next year!