I haven't updated anything like as much as I could have done this month... so this blog may be a little longer than usual. Or a lot longer. It really depends on just how long I can be bothered to type for (it is 23:26 at time of writing) and whether the wonderful sounds from OceanLab coming from my speakers are enough to keep me awake.

Anyway, there will be a fair bit to chew through, so let's crack on.

On the 21st I was very much in the mood for some steak. Peppercorn sauce. Onion rings. Chips. Yes yes yes.

I'm not going to list the ingredients, because this is so simple to do (I'm excluding the chips and onion rings here because they were out of a bag. Shame on me, whatever.) 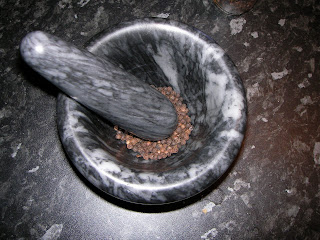 Start by crushing a few whole peppercorns with a mortar and pestle. You can use pre-ground black pepper I suppose, but the flavour wouldn't be as intense.

While crushing the peppercorns, set a heavy based pan with a little oil on a high heat. Once the oil is up to temperature, pat some salt and pepper into the side of the steak you are going to lay facedown in the pan. Stick it in the pan and then pat in more seasoning onto the reverse.

I was cooking rumpsteaks, about half an inch thick. For this sort of size and cut, two minutes on each side is an adequate amount of time to fry. Once the steak has cooked, set it aside to rest but keep the pan you were using - just lower the temperature a little. 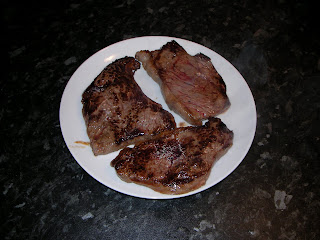 Time to add your peppercorns into the pan. Allow them to heat in the beef juices for a while to release their flavour and aroma. Add to this one beef stock cube and about 3tbsp water. Let this all simmer down before adding about 150ml cream. Stir it all together well so that it combines - do not let the sauce overheat and split. 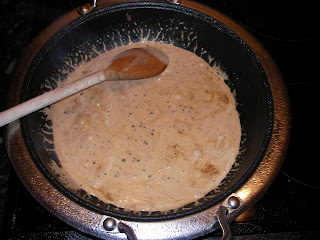 Once the sauce is ready, you're ready to plate up. Pile up the chips, onion rings, steak and liberally douse the lot with peppercorn sauce. 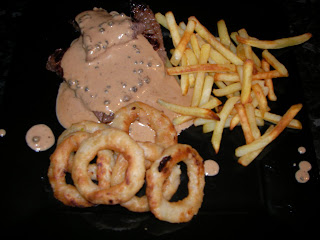 Next up was to make a cake for a colleague who was leaving work and moving to Scotland. Finally the mystery of the reasoning behind the caramel sauce is revealed!

The trial run from the last blog meant that the caramel worked much better this time around... however the cake as a whole didn't.

I should start by saying that the cake was a bit of a concept idea, so I was never sure whether it would work. Though I don't see a reason why it wouldn't. I think it was just down to some poor execution on my part which is why it never saw the light of day at work (sorry everybody!).

I'm not going to put a recipe or anything up, because mine clearly didn't work. But one day I'll get it sorted. For now, I have a bowl of all the three elements mixed together in a large lumpy mess. It tastes good, but it's no finished article. Basically I think I didn't get the temperature of the sugar mixture up high enough when making the brittle so it never set so as to give a 'snap' when broken. It went firm but a little gooey.

Like I say though, still delicious, and I'm getting through it gradually (it's sickly sweet). 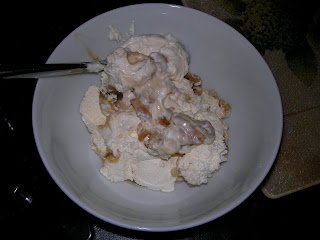 And finally, to show that not everything I eat or create has to be extravagant or amazing or even remotely tasteful, I had cheese on toast with beans this evening (before going out for a curry...).

Here is what I did to the beans...

- The contents of your stockcupboard (You must not discriminate - whatever comes to hand!)

Heat a little butter in a pan, just enough to fry off half a red onion, finely diced with a good helping of salt and pepper. 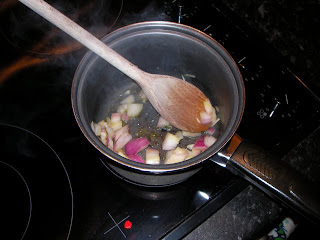 Once the onions are browned, it is time to put the beans in the pan. At this point, your recipe may vary drastically from mine - just mix stuff in from your stockcupboard. Leave nothing out. I threw in a good dash of tabasco, a splash of HP sauce, and some worcestershire sauce too. Give it a good stir and allow the beans to heat through. 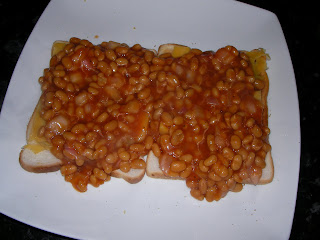 - It's the Christmas meal for a few of our friends this coming Monday (some of them are away over Christmas and we are having a farewell dinner sort of thing) and I am bringing pudding. Tangerine sorbet is definitely on the menu, and I had said chocolate fondants too... but I feel that's a little ambitious for ten people. So it'll be some sort of hot rich pudding followed by the sorbet as a cleanser.
- I'm cooking over the weekend too, but that's a secret for the moment (similar situation to the caramel story!), but all shall be revealed.
Posted by David at 15:25