So, I've been registered to use this blog for a couple of days now, but I wanted to wait until I had a really good, foodbased, reason to actually open it officially.

And while I haven't waited for a really good reason, I have at least a decent story to go with a recipe that I want to post.

Being from Scotland and living in England, I am very often misunderstood in restaurants when placing an order. This is especially true when it comes to ordering drinks.
The following is a list of what I have ordered and what I have subsequently been presented with by the waiter:

All true, and honestly, I don't have a speech impediment other than my Glaswegian accent!

The most recent problem with ordering drinks I have had however, has been when I have asked for a Virgin Mary. Twice in the last month I have been in pubs where the bartender did not know what this popular and common mocktail was.
In the vain hope that bartenders of the world will follow this blog, the following is my recipe for (and a little history behind) the Virgin Mary mocktail.

First of all, for the version I made this evening - very cut down due to lack of ingredients - you will need a carton of tomato juice, a bottle of tabasco sauce, a bottle of worcestershire sauce (I used Lea & Perrins) and cracked black pepper. 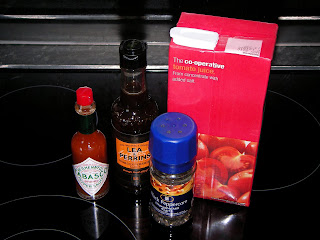 From here, it's all very simple. I had a rather large glass, so I used a couple of teaspoons of tabasco (I like it hot - it's a refreshing drink, but I think more so when it feels like you've stripped off a couple of layers of throat), three or four of the worcestershire sauce, and finally a generous helping of ground black pepper on top of that.

Then, add the tomato juice. Pouring on top of the spice mixture helps to mix it through, but a good stir is advisable.

Very simple - something every good bar person should know. 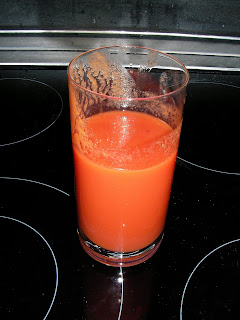 Anyway, that's my cut down version. Often though, the drink also contains a little lemon juice, a dash of celery salt (normal salt will also do - I didn't add any to mine because the tomato juice was pre-salted), and a celery stick to garnish and stir with.

According to Wikipedia (link!), the drink is also known as a Bloody Shame or a Holy Mary.

Virgin Mary rant over, there will be some more substantial posts in the near future:

- I am making a birthday cake for a colleague's son which I shall document here (based on a recipe found here).

- My wife and I will be attending the Foodies Festival in South Parks in Oxford over the weekend starting 28th August, full write up to follow!
Posted by David at 11:57

Email ThisBlogThis!Share to TwitterShare to FacebookShare to Pinterest
Labels: drink